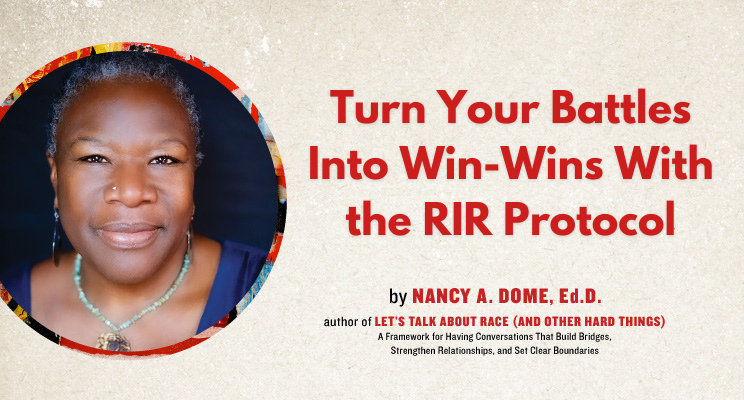 The following is adapted from Let’s Talk About Race (and Other Hard Things).

All of us have had interactions with other people that feel like a battle. When I was teaching in the court schools, for example, my students would come in wearing sagging pants, gang colors, hats, and other items not allowed for their probation.

Initially, I fought them on it, telling them to take their hats and colors off. Finally, one of the kids said, “This is survival for us. Imagine me wearing a different color going through my neighborhood. I’ve got to go through opposing gang neighborhoods just to get to school.”

Once I understood that perspective, it shifted me. I acknowledged their need to survive and navigate their world. I wasn’t out there with them and unwittingly, I was causing the same harm that had been perpetuated on them while they were in public school…and was the reason they were in alternative education in the first place.

I was able to set the boundaries of not wearing certain items in the classroom while also recognizing what they needed to do literally to stay alive. I created that environment—which was a win-win for all of us—through listening to my students and empathizing. Had I not negotiated that situation, I would have remained the authoritarian, demanding different behavior they couldn’t deliver on, getting them suspended, and ultimately getting them reincarcerated for violating their probation.

What you will learn:

Set People Up for Success With Compassionate Dialogue

Working with my kids opened my eyes. I realized the only way to set them up for success was to create a space where my students could speak in a direct way with me without fear that I would interpret their dissent as disrespect. The key to doing that was Compassionate Dialogue™.

With Compassionate Dialogue™, my students were clear that I didn’t understand what they were going through, but they were also clear that I sincerely wanted to. Both could be true. I was open to understanding them and meeting them where they were. Together, we collectively took responsibility for our behavior.

Once we made that connection, I didn’t have to tell them to take off their hats or colors; they just did it. By the time they sat down for class, they looked like they needed to, with their hats off, pants pulled up, and belts tightened. On the way out, they’d transition back to the appearance they needed outside.

This solution worked for all of us. They got what they needed, and I got what I needed in the space: that’s collective responsibility. I wasn’t the authority issuing commands. Instead, we collaborated to create boundaries and expectations together regarding how we would behave in the space, together and individually.

Recognize It, Interrupt It, and Repair It

The RIR Protocol is a tool comprising the bigger picture of Compassionate Dialogue™, which is a strategy and a way to engage with others through the lens of compassion. Rather than trying to label someone as wrong, shame them, or prove your point, the goal is to understand one another and then come to a resolution together.

Sometimes that resolution is divorce, but the conversation comes from a place of empathy. Empathy means feeling what it’s like to walk in someone else’s shoes, which is the level of understanding we’re looking for.

Even if I don’t agree with what you’re saying, how might I empathize enough to understand where you’re coming from? This approach is different from sympathy, and definitely different from pity, though people sometimes conflate them. Sympathy means feeling sorry for someone because they had a bad experience, and pity comes from a sense of superiority.

Empathy—which we can achieve using the RIR Protocol—involves seeing someone eye-to-eye, walking in each other’s shoes, and wanting to understand what the other person is experiencing and why they think or feel the way they do. If we can enter dialogue from that empathetic stance, the power dynamic and energy around the conversation shifts. A contentious topic may suddenly not be as contentious if both of us share that goal.

The conversations are still hard, but when you come from a place of empathy, they’re also purposeful. People aren’t simply venting at one another. Both parties feel invested in coming out the other side of that okay. The motivation shifts away from adversarial and toward cooperative. Empathy has compassion, but it maintains strength, too.

For more advice on how to implement Compassionate Dialogue™ in your life, you can find Let’s Talk About Race (and Other Hard Things) on Amazon. Cultural Humility and the Collective

Turn Your Battles Into Win-Wins With the RIR Protocol™ Ready, Set, Pause: What To Do Before Launching a Diversity, Equity & Inclusion Strategy