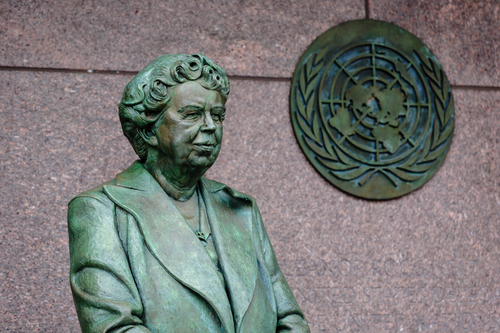 From the Eleanor Roosevelt Papers Project: “As she traveled the nation, ER witnessed the seemingly intractable hardships wrought by the Great Depression. Lorena Hickok‘s field reports detailed the inadequacies of Federal Emergency Relief Administration programs and brought individual stories of personal hardship to ER’s attention. And although ER had visited African Americans when she toured poverty stricken areas the summer after she became First Lady, she did not recognize the depth of institutional racism until she pressured the Subsistence Homestead Administration to admit African Americans to Arthurdale. Her intervention failed and she invited NAACP Executive Secretary Walter White and the presidents of African American universities to the White House to discuss the situation.” Although unaware of issues of civil rights before she became first Lady, she saw first hand the hardships of those she met during her time and took action. Other articles about the work of Eleanor Roosevelt: First Lady on the Front Lines Articles on Teaching Civil Rights Eleanor Roosevelt and Race Eleanor Roosevelt, History